Researchers have found there is a difference between sitting at work and sitting in front of a television when it comes to your health.

Scientists have been studying for years the effects of sitting and have come to the conclusion extended periods of uninterrupted sedentary behavior is detrimental for your health, especially your heart health. But closer scrutiny shows not all sitting is the same.

Female athletes may need to be concerned as much about pumping iron outside the gym as inside the gym.

Study results published in the European Journal of Applied Physiology showed up to 35 percent of female athletes have low iron levels compared to only five percent of the general female population in Australia. It could be worse in the U.S.

Too much sitting is dangerous but you can reverse the damage by engaging in exercise as long as you do enough.

Too much sitting has been linked to shortened life spans but it was previously unclear if there was a way to offset the risk aside from not sitting for so long. The results of a new study published in the Journal of the American College of Cardiology show increasing physical activity to recommended levels eliminates the association in all but the worst cases of excess sitting.

Once a Week Sufficient for Weightlifting Seniors

New research shows just one day a week has benefits for seniors when it comes to lifting weights. 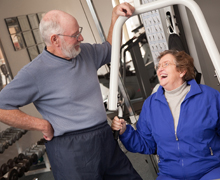 Lifting weights is great for seniors when it comes to maintaining strength and flexibility but it doesn't have to be a full-time pursuit because new research shows it positively affects blood values, muscle strength and even mental wellbeing with just one session a week in those in the 65-75 age range.

Inactivity is Common Around the Globe

Survey results are in and 1.4 billion people or more than 25 percent of the world’s adult population is not getting enough physical activity according to researchers at the World Health Organization. While the global numbers are bad, it’s worse in America.