A new study from researchers at Case Western University shows how antibiotics can actually do more harm than good by destroying good bacteria that would normally attack an oral infection and reduce inflammation.

Inactivity is Common Around the Globe

Survey results are in and 1.4 billion people or more than 25 percent of the world’s adult population is not getting enough physical activity according to researchers at the World Health Organization. While the global numbers are bad, it’s worse in America.

Dirty air is responsible for more than just breathing problems

It has long been known that air pollution can cause breathing problems and other physical ailments but a new study published in the Proceedings of the National Academy of Sciences now shows air pollution could also affect your ability to think. 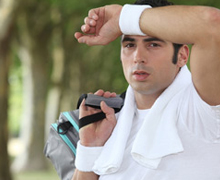 New research shows your brain swells when you are dehydrated and your ability to perform routine tasks is diminished. Those are the findings of a group of exercise physiologists from Georgia Tech.